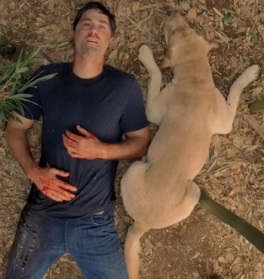 No, I’m not referring to the return of the cicadas that are starting to boil up from the ground after being asleep for seventeen years.

It’s the time of year to talk about TV season and series finales.

And, of course, this brings about yet another opportunity for people to complain about/decry the ending of Lost.

Let’s face it, this is not a once-a-year phenomenon. Any mention of Lost, any mention of anyone connected to Lost, and you are certain to see the following comments:

Or my personal favorite:

“I wasted six years of my life on Lost!”

A few other things repeatedly show up in comments sections, but I try to keep this blog rated somewhere in the vicinity of PG-13, so I won’t repeat them.

It’s not the only polarizing ending of a TV series. Entertainment Weekly recently had two slideshows on its web site—one for best series finales and one for most frustrating finales. Lost shows up on both, but so do the finales of Seinfeld and The Sopranos. Even so, it’s certainly the biggest lightning rod when it comes to the subject of series finales.

Look. I’m not out to convince anyone who was genuinely disappointed in the ending of Lost. People feel the way they feel. However, there are SO many inaccurate representations of the ending, that I felt moved to create this list to counter them. Let’s start with:

1. Everyone died in the original plane crash.  Blame ABC for this commonly-held belief. ABC made the decision to show the final credits over a shot of the empty beach where the “Losties” camped, with their belongings scattered everywhere as if it were immediately after the crash.

The producers/writers/directors of a show have no say over what is shown while the credits roll. This is left to the discretion of the network. They can show anything they want—scenes from next week’s episode (clearly not an issue here; just an example), scenes from another show to promote it, or a blank screen, or whatever else they want. They can even not show the full credits, if there’s a time issue (not every episode is the same exact length).

“Everything that happened, happened” was an oft-repeated phrase in the show. There was even some on-the-nose dialog in the notorious “flash-sideways” scene between Jack and his father where his father explained that everything the characters experienced on the island REALLY HAPPENED. The producers and writers have been quoted as saying it, too. Yet this belief still persists that they all died and the island was a kind of purgatory.

They didn’t. It wasn’t. I promise you.

2. The ending was deus ex machina. Aaargh! Is there any literary term more misunderstood than deus ex machina? I even wrote an article about it specifically because I saw someone erroneously use the ending of Lost as an example.

Deus ex machina means something or someone takes the fate of the characters out of their own hands.

Not one character had their destiny taken out of their hands.

Jack chose to sacrifice himself to stop the Man in Black from leaving the island, thus unleashing darkness throughout the world.

Kate chose to leave Jack, the man she loved, behind so she could take Claire home to reunite her with her son Aaron.

After a great deal of persuading, Claire chose to go with Kate.

Desmond chose to return to Penny and his son.

Sawyer, Miles, Richard and Frank also chose to leave the island, taking a huge risk flying out in a plane that had recently crashed on the island.

Rose and Bernard chose to stay on the island.

Every character made a choice. No deus ex machina here.

3. The religious aspects of the ending came out of nowhere.  This is one of the criticisms of the finale that makes me suspect that some of the most vocal naysayers didn’t even watch the show.

There were three major running themes throughout the series:

I’m not pulling this out of the air—if you were truly one of those people haunting Lost message boards, you had to have participated in these thematic discussions. There was even an episode called “Man Of Faith, Man Of Science.”

Even more to the point, religion was an important aspect of several of the characters:

Charlie, Hurley, Desmond and Mr. Eko are explicitly shown to be Catholics. In fact, Desmond was once a monk and Mr. Eko is a priest (or calls himself one, after he took his dead brother’s place).

Jin and Sun are Buddhists.

Sayid is a practicing Muslim.

Think about how unusual that is for a TV series. Most of the time, the religion of TV characters is either vaguely implied or not specified at all.

Religion plays an important part in several episodes. Some examples:

Claire asks Mr. Eko to baptize Aaron, even though she’s not religious (she is shown to be more in the New Age camp, believing in astrology and psychics).

Mr. Eko and Charlie start building a church on the island.

Charlie crosses himself just before he dies.

Sayid is forced by the CIA to infiltrate an Islamic terrorist cell.

Kate makes a crack about Jack’s father’s name, Christian Shephard, in case anyone missed the point over six seasons.

It didn’t come out of nowhere.

4. The ending is “too happy.” I guess this falls into the category of personal opinion, but I found it very sad, actually.

I think what really bothered some people is that the flash-sideways was assumed to be a re-set of the character’s lives, where the plane never crashed and all the tragedies that happened on the island were erased.

If there’s anything the writers could be scolded for, it’s for giving that impression of the nature of the flash-sideways. The way the scenes were cut in the first episode of Season Six was deliberately misleading.

But . . . that’s not an uncommon trick by writers, they do it all the time.

To me, it was very bittersweet, almost like a knife through the heart, to know that Boone and Juliet and Jin and Sun and Charlie and other beloved characters were gone without a chance to live out more of their lives.

On the other hand, it truly would have been a cheat if the writers had given the characters a “do-over” life.

Everything that happened, happened.  Dead is dead.

They told us this many, many times over the life of the show.

5. It was focused too much on characters and not enough on the mysteries. It was always about the characters.

The mysteries were clearly used as a way to reveal character.

If that disappoints you—fair enough. If you wanted it to be more about the mysteries and the mythology, you are totally entitled to feel that way.

But since from Day One the story spent so much time focused on the characters, it shouldn’t be surprising that’s what the end was about, too.

6. The writers didn’t know how the show was going to end until fairly late in the series. This one’s true.

Damon Lindelof, among some of the other writers, admitted as much—they never expected the show to last past Season One. One of the reasons the show hit a very bad patch by mid-Season Three is because they didn’t know how much longer the series would last and how many characters and mysteries they had to keep spinning.

So they chose an end date and exit plan.

Here’s the thing, though. Even when it comes to the most devoted planner, outliner, meticulous storyboarder—most writers don’t know precisely how a story is going to end when they start writing it. For some reason, Lost was singled out as a show where the writers had to know EXACTLY where they were going from the EXACT MOMENT they started putting pen to paper, holding them to a standard almost no other writers in the world have to live up to.

That doesn’t mean the writers ignored everything that happened in the beginning—in fact, there are many threads from the early episodes of Lost that made it into the final season.

For instance, in an early episode, The Greater Good, Sayid pretends he is going to become a suicide bomber to help the CIA catch his friend who has joined a terrorist cell.

How does Sayid die? He blows himself up—for the greater good.

There are other examples of this—something easy to discover on a second viewing of the series. (Or third. Yes. I’ve watched the series all the way through three times. I may do it again one of these days.  Don’t judge me.)

7. They didn’t give answers.  Every major question was answered.

On Lostpedia they list all the unanswered questions for each episode, and most are minor.

What the island was, what the characters were doing on the island, what they had to do, what the Dharma Initiative was, who The Others were—all these questions were answered.

The problem is that some people wanted a very detailed explanation of the mythology, which the writers chose not to give. (Damon Lindelof has said he was afraid of an exposition-heavy scene like the one in The Matrix.)

Again, this is personal preference. If you preferred a detailed explanation of all the mythology involved, then you were going to be disappointed. But it’s not fair to say that they didn’t answer most of the major questions.

It’s again holding the writers of Lost to a tougher standard than other writers. Very few writers tie up every little thread neatly. In fact, when they do, it’s something that’s usually criticized. Heck, even Hitchcock didn’t tie up all the threads in his movies.

Thematically, it’s a different issue, because the answer they gave to faith or science and fate or self-determination was “yes,” “yes,” “yes,” and “yes.”

Some people were obviously aggravated not to get a clear-cut answer to the thematic questions the show posed.

Personally, I love the ambiguity.

Probably not, It sounds so dramatic, I doubt we’ll ever see that mantra disappear.