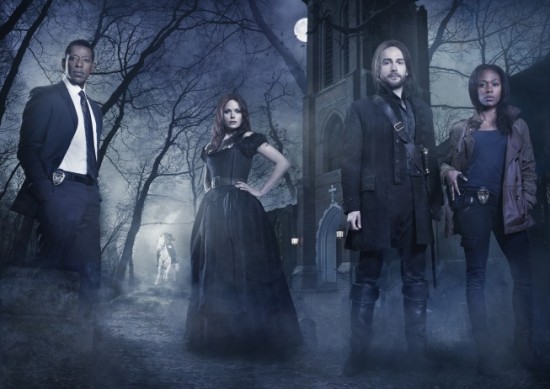 1. New hits are already emerging from the Fall TV season. Sleepy Hollow, Agents of S.H.I.E.L.D., The Blacklist and The Crazy Ones were the first of the new series to break from the pack. Sleepy Hollow has already been renewed for a second season and The Blacklist has a full season order. And several shows haven’t even premiered yet!

2. Harry Potter is back! Without Harry Potter! It was announced that JK Rowling is writing a series of screenplay adaptations of her Harry Potter spin-off, Fantastic Beasts and Where to Find Them. It will return to the Harry Potter universe, reportedly 70 years before the action of the original books. Nice to see my Twitter feed light up with JOY instead of ire for a change.

3. #DiversityInSFF Twitter hashtag takes off. Author Jim C. Hines started a Twitter hashtag to discuss diversity in science fiction and fantasy. Subjects as, well, diverse as panel parity and accessibility issues at conventions, creating believable alien cultures in science fiction, racial and gender stereotyping, fantasy books not based on European culture and history, and book recommendations are only a small sampling of what was covered. The conversation was fascinating and caught the attention of some news outlets, including The Nation and the U.K.’s The Guardian. Because of the Twitter discussion, Tor Publications updated their guidelines to emphasize they are interested in submissions with more diversity. The hashtag is still in use, do go check it out (and contribute!), as well as #DiversityInYA, which discusses diversity in young adult fiction.

4. Speaking of diversity in young adult fiction: hooray for those making the casting decisions for the final two Hunger Games movies, Mockingjay 1 & 2! It is shaping up to be an even more diverse cast than the books. Mahershala Ali (House of Cards, The 4400) was cast as fan-favorite Boggs, and Patina Miller as Commander Payler. Boggs casting was the subject of MUCH fan speculation and several African American and Latino actors were suggested, including Terrence Howard and Esai Morales. Although Ali wasn’t on most fans’ radars, many welcomed the choice. When the fantabulous Lily Rabe (American Horror Story) was cast as Commander Lyme, many speculated they would combine her character with that of Commander Payler. Instead they cast relative unknown Miller. Along with the news that Julianne Moore was cast as President Coin, it made September a great month for the fandom.

5. Um, except for the crappy stunt E! News pulled on us. The E! Network announced on Twitter they would be showing NEW footage from Catching Fire that night. And . . . they lied. They forced Hunger Games fans to sit through 1 ½ hours of Kardashian, Miley Cyrus and Fashion Week news as it slowly dawned on us that all they had was an old interview of Sam Claflin everyone had already seen on the internet. Hey, news outlets: don’t piss off fandoms. Let’s just say if they ever institute giving cable and satellite subscribers a choice of channels, E! is the first one Hunger Games fans will drop.

6. The finale of Breaking Bad broke records. I will write a separate post about my thoughts on the final season of Breaking Bad, but the ratings for the finale are notable because they increased over 400% from the finale of Season 4. It was over 10 million viewers compared to 1.9 million. That’s freakin’ AMAZING. And it was due almost entirely to people getting up to speed with Netflix binge-watching. Emphasizing how we watch television is undergoing a significant revolution and will probably impact network decisions on how long to give a series a chance to find its audience.

7. Dear Food Network: maybe Cupcake Wars has seen its best days. I like the show, it’s a fun competition, with four teams of cupcake bakers vying to serve their product at an important media event. However, this season has seen so many repeat contestants from the past it’s starting to look slightly hilarious. One team of bakers was on for the FOURTH time (and, surprise!—they lost AGAIN). Obviously, there’s a finite number of cupcake bakers in this land. Time for Pie Wars, maybe?

8. The Emmy Awards really dropped the ball on their memorial tributes. Yes, I know—it’s not possible to give a special tribute to ALL who passed away over the past year. But it was stunning that they left out a special tribute to Larry Hagman, who played one of the most iconic characters on television, J.R. Ewing. They didn’t even have the excuse that a new generation was unaware of him, since the Dallas reboot is recent, ongoing, and successful. There was also complaining over the omission of Jack Klugman. Some were also incensed that Cory Monteith was included, considering he was so young and died from a drug overdose. It’s a difficult call, no question, but if you’re going to do it, find a way to do it right.

9. The Toronto Film Festival debuted several supposed Oscar contenders—and some actually sound like they are amazing. In fact, I saw one today—Gravity—and it IS amazing, on every level. (See it and see it in 3D—yes, it’s worth it and no, the 3D is not a gimmick.) Others possible Best Picture contenders are 12 Years a Slave, August: Osage County, Mandela: Long Walk to Freedom and Dallas Buyers Club. There’s buzz that James Gandolfini may be nominated posthumously for Enough Said, and that the Best Actor category may have more African-American actors in contention than any other year in Oscar history. Best Actress is also shaping up to be an incredibly competitive category, with Sandra Bullock, Meryl Streep and Judi Dench (for Philomena) looking like shoe-ins. This may be one year “Oscar-bait” movies turn out to be just plain “must-see” movies.

10. Technically, this is October news, but I feel the need to acknowledge the passing of author Tom Clancy. Espionage thrillers are not my personal cup of tea, but there’s no question Tom Clancy left a huge impact on both the publishing and movie worlds. (I actually quite like the movie version of The Hunt for Red October.) For writers, he’s a huge inspiration because he was rejected 50 times before the Navy published his first book. A sad loss, and one that happened much too soon.