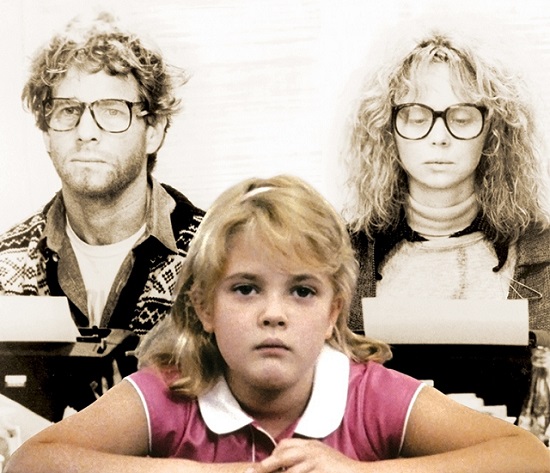 This review is a contribution to Todd Liebenow’s 1984 Blogathon at Forgotten Films.

I think I was the last person to join Todd’s 1984 blogathon. 1984 saw a remarkable number of classic/terrific/good films, but they were already snapped up by other bloggers. When I went through the very short list of films that were still available, Irreconcilable Differences immediately jumped out at me. It’s one of those movies where the sum of its parts is far greater than the whole. Some of those parts I truly love. The others–not quite as much. But I still find myself watching it whenever it appears on TV.

Starring Ryan O’Neal, Shelley Long, Drew Barrymore and Sharon Stone, Irreconcilable Differences was a modest hit and garnered Golden Globe nominations for Long and Barrymore. Written by husband-wife team Charles Shyer and Nancy Meyers (and directed by Shyer) it recounts in flashbacks the marriage of Albert Brodsky (O’Neal) and Lucy Van Patten Brodsky (Long). These flashbacks occur during a trial where their 9 year old daughter Casey (Barrymore) is seeking to divorce her parents.

Albert and Lucy meet while Albert is hitchhiking to Hollywood. A film studies professor, Albert gets a job working for a studio executive. He is given a shelved script to direct. Suffering from writer’s block, he asks Lucy to help him with the script. The movie goes on to become a critical and popular smash.

Albert’s career blossoms, while Lucy never gets the credit she deserves for her part in the film’s success. While searching for the lead actress in his new movie, he finds an unknown named Blake (Sharon Stone) and moves her into the house. Lucy soon realizes Albert and Blake are having an affair.

Lucy and Casey move out, while Albert and Blake become the toast of Hollywood. Bitter from the breakup, Lucy begins writing a tell-all book about their marriage. Albert sinks all his money in a musical remake of Gone with the Wind called Atlanta as a vehicle for Blake. Production disasters and Blake’s diva antics shoot the cost of the movie into the stratosphere and it becomes an epic box office failure.

As Albert’s career craters, Lucy’s book hits the best seller list. Both parents neglect Casey, leaving her alone more and more with the housekeeper. After a fight between her parents which ends with the two of them literally having a tug-of-war with Casey, she sues them.

There are really three movies happening in this one movie: first, it’s a modern take on a classic romantic comedy of the “divorced couple finds their way back to each other” variety. (The modern part: rather than reconcile, their ambition and selfishness get in the way of a happy ending.)

The second movie (and my favorite) is a dead-on satire of Hollywood during the late 70s/early 80s.

The third movie is a domestic tragedy, with a child as the hero who finds a way to escape her neglectful parents.

These three elements never completely jell, to the detriment of the movie. But there’s still a lot here to enjoy, in my opinion.

Many of the details of the Brodsky marriage were inspired by the real-life marriage of director Peter Bogdanovich and his first wife Polly Platt. (Platt even commented once that the movie got more things right than wrong.) Cybill Shepherd, whose relationship with Bogdanovich broke up the marriage, was most likely the inspiration for Blake. Once Bogdanovich and Platt ended their relationship his career tanked, some claim because her contributions to his films were what made them succeed.

But it’s obvious to me that it wasn’t only the Bogdanovich/Platt relationship that inspired the Hollywood part of the film. In fact, many of the “wunderkind” directors of the 1970s (Spielberg, Lucas, Coppola, Cimino, to name a few) had vanity projects that crashed and burned during the late 1970s and early 1980s. Most famously, of course, was Cimino’s Heaven’s Gate. The movie mercilessly digs directors like Cimino, who busted their movie budgets by insisting on authentic details. (Albert decides they don’t have enough flies for the field hospital scene, and is told they have already hired every fly in the state.)

While some directors of the era, like Spielberg, weathered their failures, others like Bogdanovich (his At Long Last Love is often cited as one of the worst films of all time) and Cimino (ditto Heaven’s Gate) never recovered their status as A list directors. Coppola fared better, though like Albert he lost much of his fortune when his vanity project One from the Heart failed.

Most of the Hollywood part is hilarious, particularly the scenes of Albert shooting Atlanta. There are no words sufficient enough to describe Blake belting out a Broadway-esque song while dancing around a field covered with wounded Civil War soldiers. (The lyrics are priceless.) This part showcases Sharon Stone’s considerable comedic gifts. It’s a shame she’s only rarely done comedy since then. 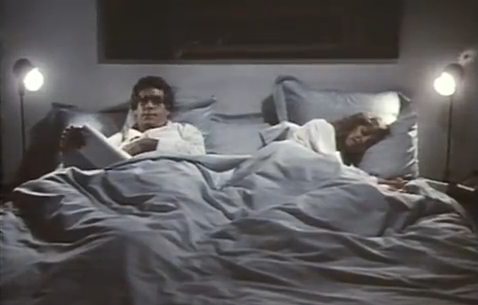 The tone of the film changes quite a bit from scene to scene. It shows how movies were still transitioning from the hyper-realism of the 1970s to the over-the-top style of the 1980s. The trial and movie production scenes are exaggerated for comedic effect. The flashback scenes of Albert and Lucy meeting on the road have the hyper-realistic feel of a 1970s movie. The one-on-one scenes between Casey and each parent are quiet and sometimes truly heartbreaking. (Especially considering what we now know about Barrymore’s own childhood. Like Casey, she eventually became an emancipated minor.)

It’s in the courtroom scenes where Barrymore truly shines. Her monologue–which equates how she’s been treated by her parents with how dogs are treated by their masters–is devastating. It kind of makes us feel bad for laughing at Albert’s and Lucy’s cluelessness and narcissism.

The ending is bittersweet, and comes across as surprisingly honest. There’s no Hollywood movie last minute save for this family. But there’s a small flash of hope that Casey’s parents may grow up at last.

In spite of its discordant tones, Irreconcilable Differences still offers some genuine laughs and pathos. It’s one of those movies that was perhaps overly ambitious (like Albert’s movie Atlanta, but without the insanely big budget) but still has enough that works to make it a worthwhile movie experience.

5 thoughts on “The 1984 Blogathon – Irreconcilable Differences”