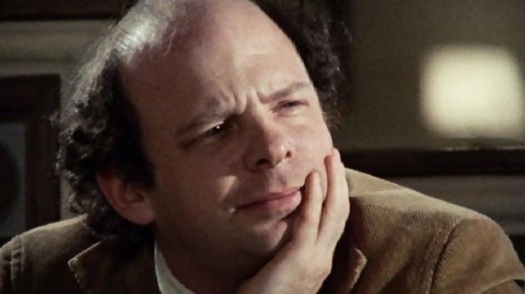 This post is my contribution to the What a Character! Blogathon 2014, sponsored by Once Upon a Screen, Outspoken & Freckled, and Paula’s Cinema Club.

One reason I chose Wallace “Wally” Shawn as my subject for this blogathon is because I had the opportunity to meet him many years ago. This was well before he became such a ubiquitous presence in movies and on television. I worked for the company that owned the theater that played My Dinner with Andre, his first major film success, for over a year in New York City.

I also had an over-the-phone encounter with his co-star Andre Gregory. (TWO name drops!) Gregory was tickled by the film’s success and loved when people recognized him because of it. It was not unusual to come out of the theater in New York after seeing My Dinner with Andre and find Andre standing in the theater lobby, wearing the same sweater he wore in the movie. He loved to see how people reacted to the movie.

I used to answer the office phones, and the first time he called and identified himself, I exclaimed in a delighted voice, “Hello!” Gregory echoed my “Hello!” with the exact same intonation and chatted with me as if he’d known me for years.

Don’t get too excited about any fascinating anecdotes from my encounter with Wally. In a way, it was even more remote than my conversation with Andre: Wally attended one of the company’s parties, our annual Academy Award bash, thrown by one of the employees in his very modest downtown apartment. Wally was surrounded by people most of the party. To my everlasting regret, I was too shy to speak to him. However, I did spend an enjoyable evening listening to him talk about movies, theater, and Deborah Eisenberg, the woman who remains his partner to this day.

My mother, who worked at the same company, was not so shy, so I do have a Wally anecdote. She likes to tell about a conversation she once had with him. He was doing a bit part on a now long-defunct soap opera (I think it was called Texas). We loved soap operas and she promised Wally we would watch him in it.

She thought he was going to go into some kind of rant about how soap operas are a low form of entertainment– but that wasn’t the case at all.

He said, “My character is some sneaky guy who hides in a closet most of the time. That’s not what soap operas should be about. They should be about romantic and family relationships.”

(What’s really interesting about this story is he has claimed in interviews he doesn’t own a television.)

In spite of the fact that I missed the opportunity to speak to him, he remains one of my favorite character actors. Yes, probably because I kinda, sorta met him, but it’s also just because he’s so enjoyable to watch. After we met him, every time he popped up in a movie or TV show my mom and I would poke each other and say, “Look! It’s Wally!” This began to occur more and more frequently over the years. Now, of course, he is one of the most recognizable actors in the business, with an impressively long resume.

His films run the gamut from period dramas (The Bostonians, The Moderns, Mrs. Parker and the Vicious Circle) to comedy (four Woody Allen movies, Clueless, The Cemetery Club). His television work is also impressively varied, as either a regular or recurring character (Star Trek: Deep Space Nine, Crossing Jordan, The L Word, Gossip Girl), along with a seemingly endless list of one-time guest appearances. He has lent his distinctive voice to several animated movies, including The Toy Story franchise (as Rex the dinosaur) and The Incredibles.

(Another true Wally story: when I saw The Incredibles in the movie theater a little girl sitting behind me, no more than 8 or 9 years old, suddenly piped up, “That’s Wally Shawn!” That’s how recognizable his voice has become.)

He is so beloved a character actor nowadays that it’s easy to forget he is also a playwright and political essayist. One of his plays was so controversial it was visited by the vice squad in London and denounced in Parliament as “pornographic.” He has long been a proponent of experimental theater. Some of his work is so avant garde, it’s designed to be shown only in a person’s residence, by appointment.

He experienced a very privileged upbringing. His father William Shawn edited the magazine The New Yorker for more than three decades. His brother is classical musician and composer Allen Shawn. He speaks in interviews of going to school in a limousine and wishing he had been more like other kids.

He began his professional career as a teacher, but left that to pursue a career in theater. Acting became an extension of his playwriting career. He started appearing in his own plays during the 1970s. Several of these plays were directed by Andre Gregory.

His first film role was in Woody Allen’s Manhattan, as the ex-husband of Diane Keaton’s character. He mainly functioned as a punch-line (Keaton referred to him before he appeared on-screen as incredibly sexual).

In a strange, roundabout way, it was My Dinner with Andre that really kicked off his career as a character actor. The movie, directed by Louis Malle, was a conversation between Shawn and Gregory over dinner, discussing many events and ideas they had had over the previous few years.

The film was not an immediate success, but it grew into a bona fide indie hit after film critics Roger Ebert and Gene Siskel praised it on their show.

Wally scored what is now his most iconic role because of My Dinner with Andre. Casting director Janet Hirshenson was supposedly so impressed by the way he said the word “inconceivable” in the film that she cast him as Vizzini in The Princess Bride.

In a movie filled almost wall-to-wall with memorable character parts (many with, ahem, interesting voices and accents), Wally’s Vizzini (and Vizzini’s voice) stand out. That his criminal mastermind with an exaggerated opinion of his own genius is so popular to this day is a tad remarkable, considering the character disappears before the half-way mark of the movie. Wally has been quoted as saying he is most recognized for The Princess Bride role. 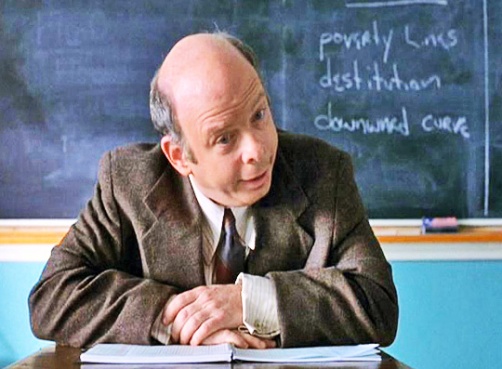 He also claims he’s occasionally recognized from the movie Clueless, where he played Alicia Silverstone’s teacher, who benefits from her character’s matchmaking schemes. (One of the very few roles he’s ever played with a romantic storyline.)

If you haven’t experienced Wally in a dramatic film, I would recommend Uncle Vanya on 42nd Street, another collaboration he had with director Louis Malle. The Chekhov play Uncle Vanya is filmed on a bare stage without sets or costumes. Like My Dinner with Andre, it sounds as though it shouldn’t work as a film, and yet it does.

One of my favorite TV appearances by Wally is in the Sex and the City episode “Splat!” where he is Candice Bergen’s blind date. (It’s especially funny if you know Bergen is Louis Malle’s widow, and that the two of them have likely known each other for decades.) “He’s a hobbit!” her character protests to Carrie.

It would be inconceivable for me to end this post any other way:

6 thoughts on “What a Character! Blogathon 2014: Wallace Shawn”