This post is part of The William Wellman Blogathon, hosted by Liz at Now Voyaging. Find the rest of the posts for this event HERE!

Since I was a little girl, I have loved Westerns. But even back then, I couldn’t help noticing one thing:

The general lack of women in most Western movies.

Sure, there would be the rancher’s wife, or the schoolmarm, or the dance hall girl (when I got older, I would learn they were actually prostitutes). But . . . it was pretty rare that women got a substantial role in a Western, which really bummed me out.

Over time, I was happy to find some exceptions to the rule. Recently, I reviewed one of my favorites: The Furies, directed by Anthony Mann, which stars Barbara Stanwyck. Three more of my favorites just happen to be helmed by William Wellman: Yellow Sky, The Great Man’s Lady, and Westward the Women.

This is hardly surprising, as Wellman made many movies with amazing women characters. He was a “man’s man” but seemed to find the women in his stories as interesting as the men, and it shows in many of his films. Westward the Women has a nominal male protagonist (Buck, portrayed by Robert Taylor), but truly, it is the women who are the stars of the movie. 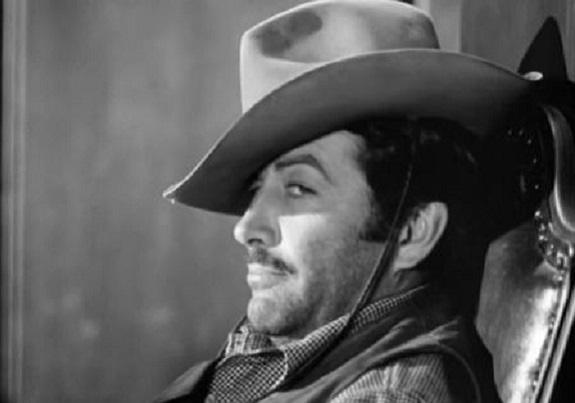 A rich Californian (John McIntyre) decides to hire Buck to bring a wagon train of women across the country as brides for the single men who live and work in his valley. Buck, convinced it’s an undoable and horrible idea, nevertheless agrees to lead the party on its perilous journey. He recruits 150 women and sets about training them for the hard work and danger that lies ahead.

The story is credited to Frank Capra, who said he based it on true events. I was surprised to find some reviews written at the time of the film’s release that expressed skepticism that such a thing could have ever happened. Historically, it’s actually not that uncommon for women to have been “imported” into remote areas where the population was overwhelmingly male. In fact, I recently watched an episode of the TV show Who Do You Think You Are?, that features celebrities investigating their family history. TV host Tom Bergeron discovered his ancestress left France for Quebec as a “Fille du Roi” (King’s daughter). These women were recruited by King Louis XIV as prospective brides for men settled in the new colony of Quebec.

When I was a kid, one of my favorite TV shows was Here Come the Brides, about women recruited in Boston to settle in early Seattle. It was based on true events, which perhaps also inspired Westward the Women. The women in that case were called “Mercer Girls” because they were recruited by Asa Mercer, who sought to even out the gender imbalance in the Pacific Northwest. 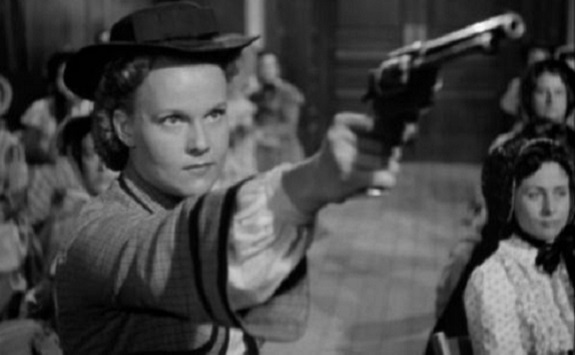 The story of Westward the Women is less about the destination and more about the journey. It’s a rare Western where women attain mastery of skills (pretty much the only other two I can think of are The Great Man’s Lady and The Ballad of Little Jo). In fact, it’s one of the few Westerns that spends much time at all on the skills and effort that went into a wagon train. Buck doesn’t have much faith that the women can do what needs to be done to make it to California. Time and again, they prove him wrong.

The story focuses mainly on three women: Fifi Danon (Denise Darcel), a “dance hall girl” who decides to look for a fresh start in California, Patience (Hope Emerson) a widow who has lost her husband and sons to a shipping disaster, Rose (Beverly Dennis) a pregnant girl looking for a father for her baby. There is also Maggie (Lenore Lonergan) a farm girl who’s a crack shot, and Mrs. Maroni (Renata Vanni), an Italian widow with a 9 year old son who hopes to grow oranges in California. 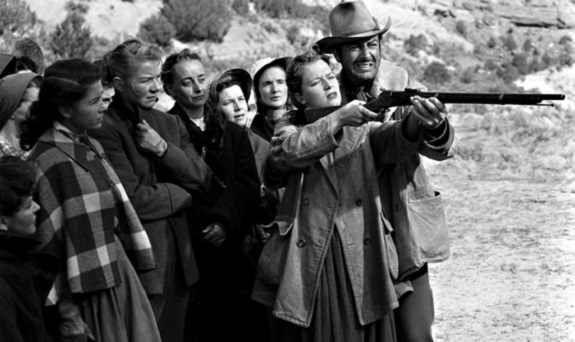 The journey is, as Buck promised, fraught with peril. There is drought, attacks by Indians (of course), a stampede, a terrifying journey down a steep, rocky trail. One of the wagons cuts loose and one of the women is killed. The scene is absolutely stunning and horrific, as the women are forced to watch their friend roll down the slope in a runaway wagon, powerless to do a thing about it.

Some of the danger is within the convoy itself, as the men who Buck hired ignore his directive to stay away from the women. One of them rapes Laurie, Fifi’s friend. Buck, fulfilling a promise he made earlier, shoots the perpetrator. Most of the men abandon the wagon train. When Buck teaches the women how to shoot, Mrs. Maroni’s little boy is accidentally killed. Unable to communicate with the others as she speaks almost no English, they have to literally drag her away from the boy’s grave. As they leave the spot, the little boy’s dog remains with the grave. 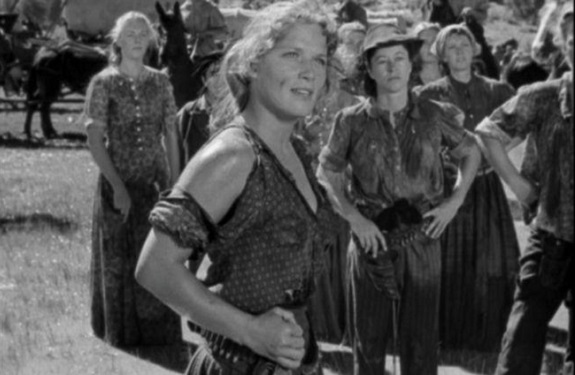 There’s no question that Westward the Women is a seminal film in the way it portrays women in a Western, but–well, most movies are problematic, even today, and this is no exception. As I mentioned in my review of The Furies, the relationship between Stanwyck and her onscreen lover Wendell Corey was awfully “slappy.” Here, Buck is both drawn to and repelled by Fifi. He not only slaps her, at one point he snaps a whip at her. I suppose this is supposed to represent repressed sexual desire, but I could have lived without it. Even so, it’s refreshing that Fifi never apologizes for her former life.

Even more refreshing is how Westward the Women upends the usual role of women in the genre. It’s not only that they get to do many things men get to do in Westerns. To me, one of the most appealing elements of the Western is the opportunity for a “clean slate”–characters redefining themselves and their lives. Even though the goal for the women is the goal for all women in their society–marriage–it’s marriage on far different terms. 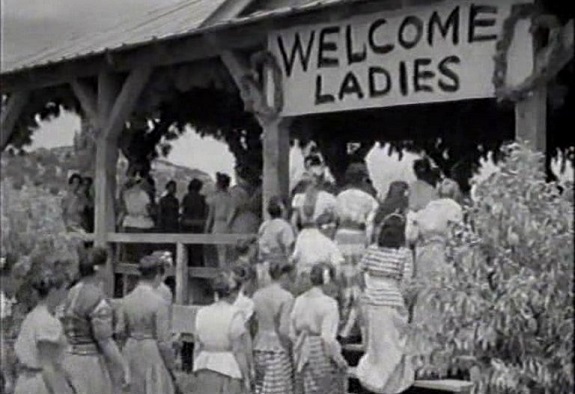 By the time the surviving women arrive in California, they have more than earned Buck’s admiration. They refuse to enter the town until they can make themselves presentable to their new husbands. Buck makes a grand speech to the men, eulogizing the women’s courage and fortitude. As agreed when he first recruited them, he allows them to choose their own husbands.

There’s almost a Darwinian aspect to the film: the women who made it are the strongest, the ones who will work the hardest and likely to bear the strongest children. But it’s also about women striking out into the unknown and persevering against tremendous odds.

It was a rare film then–and it’s still kind of rare to find one like it now.