This post is part of the 2nd Annual Favourite TV Show Episode Blogathon, hosted by Terry at A Shroud of Thoughts. Read the rest of the entries for this event HERE!

I can’t tell you how much I envy young girls today. Young women can watch movies and TV shows with amazing heroines such as Rey, Katniss, Hermione, Tris, Peggy Carter, the female Agents of S.H.I.E.L.D., as well as long overdue reboots of classic action heroines such as Supergirl and Wonder Woman.

It’s far from perfect and we still have a long way to go, but when I was a little girl, during the mid-1960s, the list was much, much shorter.

That’s why when actresses Melody Patterson (Wrangler Jane on F Troop) and Yvonne Craig (Batgirl on the 60s TV version of Batman) passed away within a few days of each other last year, it really hurt my heart. When I was a kid their characters were on a very short list that included Emma Peel of The Avengers and . . . that’s about it. (Maybe I would add Maureen Robinson on Lost in Space.)

As someone who has loved, loved, loved Westerns from a tiny age, the small number of interesting/important female characters in the genre always bummed me. When I would find a Western movie with a female protagonist, I was in heaven.

While Wrangler Jane is not the protagonist of F Troop, she is still an important, vibrant character who could have so easily been nothing more than the love interest to one of the male characters.

The creators of F Troop did something close to miraculous for the time, making her independent, capable, brave—even though, yes, she was the love interest for one of the main characters. I love it that she’s self-sufficient and dearly wants to marry the man she loves, whereas in popular culture, these things were/are sometimes still shown as mutually exclusive.

It’s obvious the inspiration for Wrangler Jane was Calamity Jane (in fact, Melody Patterson read a scene from the Doris Day movie Calamity Jane when she auditioned for the part), with a touch of Annie Oakley thrown in, as she’s a better sharpshooter than the male characters on the show.

The reason I chose the episode The Courtship of Wrangler Jane to cover for this blogathon is twofold: it’s a rare classic sitcom episode that actually deals head on with the stagnant nature of one of the show’s relationships (unlike the way relationships change over the course of TV shows now). It also does a hilarious send-up of the 1963 movie Tom Jones. F Troop was known for the kind of pop-culture references that are common today but not so common back then.

The episode begins when Sergeant O’Rourke (Forrest Tucker) and Corporal Agarn (Larry Storch) visit the Hekawi Indian camp and discover Chief Wild Eagle (Frank de Kova) has a simple way to create a steam room. O’Rourke and Agarn, seeing a way to cash in at the fort by setting up a steam room for the troops, decide they can’t accomplish this without Captain Parmenter (Ken Berry) living off the fort. The only way the captain gets housing off the fort is if he is married.

O’Rourke and Agarn visit Wrangler Jane at her store and persuade her to let them do a little matchmaking for her, claiming Captain Parmenter is simply shy and needs a little encouragement. The first attempt, with Jane dropping by the office in a pretty dress bearing a homemade pie, totally bombs. But O’Rourke comes up with another scheme—make Captain Parmenter jealous by having Agarn pretend to court Jane.

The next day, Jane brings breakfast, lunch, and dinner for Agarn, the two of them pretending to be googly-eyed over each other. Witnessing the couple together each time makes the captain increasingly jealous, though he won’t admit it.

Jane and Agarn have dinner right outside Captain Parmenter’s window. They let him know after dinner they mean to pick wildflowers in the moonlight. As he and O’Rourke watch, Jane and Agarn take turns passionately biting into their food (this is the parody of the scene in the movie Tom Jones). 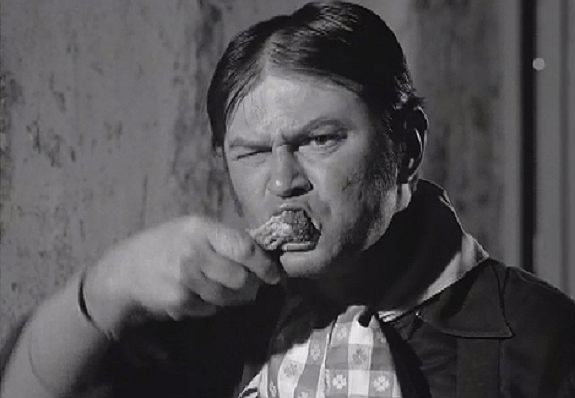 However, as with most of O’Rourke and Agarn’s schemes, this one goes slightly awry when instead of asking Jane to marry him, Parmenter decides to request a transfer to another fort.

O’Rourke doesn’t take this as a final defeat, however, and during the captain’s farewell party arranges for Agarn and a waitress to openly kiss in public. Agarn claims his only motive for courting Jane is because Jane’s father is rich. Uncharacteristically furious, Parmenter seeks out Jane, but before he can make a declaration, she spills the beans about the plot to ensnare him. She tells him she doesn’t want to get her man that way. Parmenter tears up the transfer papers and suggests he and Jane go pick wildflowers in the moonlight.

This episode particularly highlights Patterson’s comic timing (practically perfect during the eating-as-a-metaphor-for-sex scene). Only 16 years old (!) and in her first major role at the time, she more than held her own against several seasoned comic actors. (When she auditioned she lied about her age.) The producers, concerned that she was underage, toned down some of the sexual innuendo between Jane and Parmenter, which was probably an improvement from the original intention.

TV shows of the era almost never let relationships change over the life of the show (which is why most of Captain Kirk’s girlfriends died on Star Trek). This is a rare instance where a show actually addressed why two people so obviously in love with each other weren’t moving on with the relationship. It wasn’t the last time F Troop did this, either—in an episode late in the final season, Jane hires a matchmaker, and Parmenter recounts how unhappy she would be married to a military man. He recants a little when he sees how heartbroken she is—and agrees they can become engaged in three months, with a long courtship to follow, and hopefully, a long marriage after that.

I don’t think the creators of F Troop were trying to be particularly revolutionary with their show—mainly, they inverted a lot of stereotypes from the Western genre for comic effect—but purposefully or not, with Wrangler Jane they created an unusually complex female character, both for a Western and a sitcom. Her romance with Wilton Parmenter is one of mutual respect between two totally opposite characters, neither wanting to change the other.

It’s kind of awesome. I’ll always cherish Jane/Melody as one of my favorite heroines from my childhood.

12 thoughts on “F Troop: The Courtship of Wrangler Jane”