This post is part of the Time Travel Blogathon, hosted by Ruth Silver Screenings and Rich of Wide Screen World. Read the rest of the non-linear entries HERE!

BIG, BIG SPOILERS FOR ARRIVAL AND PEGGY SUE GOT MARRIED.

When I recently viewed the 2016 film Arrival, I never imagined it would put me in mind of the 1986 film Peggy Sue Got Married. In fact, Arrival isn’t sold as a time-travel movie at all, but as an alien first contact sci-fi film. It’s one of the many surprises of this very unusual and adult genre flick.

Louise Banks (Amy Adams) a linguist, is tapped by the government to try to communicate with alien creatures who have landed in various points around the world. The “heptapod” creatures look somewhat like giant squid and communicate by shooting out complicated circular symbols into the air. Louise and scientist Ian Donnelly (Jeremy Renner), along with other scientists and language experts around the world, begin to learn how to interpret the symbols.

Throughout the movie are what seem to be flashbacks to the brief life of Louise’s daughter Hannah, who dies from a rare form of cancer. As Louise learns the language of the heptapods, the “flashbacks” become more frequent. Louise confesses to the heptapods that she doesn’t understand these memories of things that haven’t happened. They explain to her that it is her future she is remembering. By learning their language, she gains the ability to see the future. Knowing that her child—by Ian, who has fallen in love with her—will die, she embraces that future with all its joys and sorrows. 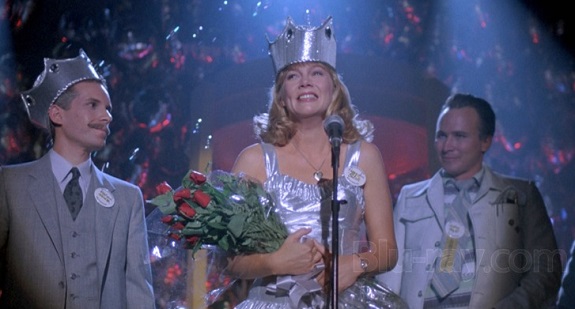 Peggy Sue Got Married is a more conventional time-travel story, about a woman who passes out at her high school reunion and wakes up twenty-five years earlier. Estranged from her husband and bitter about everything she missed because she married so young, Peggy Sue (Kathleen Turner) decides to change her destiny by breaking up with her then-boyfriend/future husband Charlie (Nicolas Cage). No matter how hard she tries to push Charlie away, she’s still drawn to him. Desperate, she leaves town to see her grandparents (Maureen O’Hara and Leon Ames). 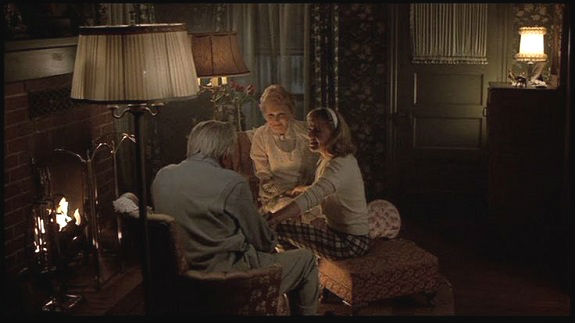 She confesses to her grandparents that she has traveled back from the future and is shocked when they believe her. Her grandmother tells her she’s simply browsing through time.

“But I’m remembering the future!”

“Pick the things that last, that you’re most proud of.”

Her grandfather takes her to his lodge meeting, where they do some weird secret ritual meant to send Peggy Sue back to the future. Instead, Charlie grabs her when the lights go out because he thinks they want to melt her brain.

Peggy Sue is shattered that the ritual didn’t work and tells Charlie again they can’t be together. He gives her a locket. When she opens it, she thinks the photos are of their children. He tells her the pictures are of the two of them.

“So are they,” she marvels. She tells Charlie she does love him and throws herself in his arms. She wakes up in a hospital room in the present. 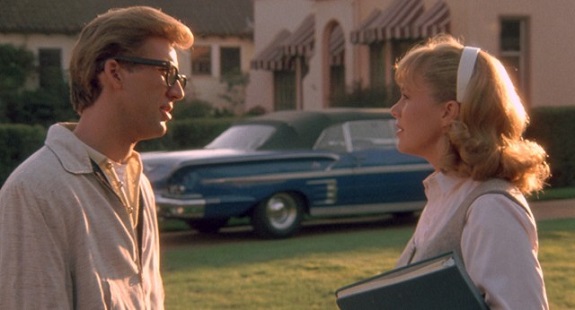 Peggy Sue Got Married was directed by Francis Ford Coppola and is generally considered one of his weaker films. I love it. I have always loved it. It is certainly flawed (it’s obvious that a poor editing job truncated some of the subplots, to the detriment of the film), but the notion of getting the chance to live your life over again, to make different choices, is such an inherently compelling one that it carries the film for me (as well as Turner’s performance, one of her best). Especially in the context of a woman trying to reimagine her life and making different choices.

Arrival, directed by Denis Villeneuve, is far more highly regarded by critics, and it is an exceptional film. As in many alien-arrival movies, human beings react with fear and stupidly come close to destroying the world. Louise uses the ability to see the future she and others have acquired to save the world from a war with the aliens. 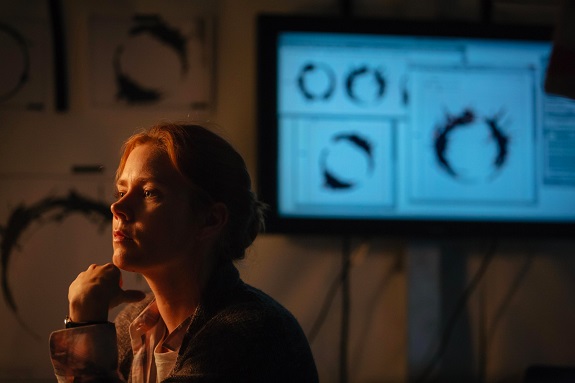 But its similarity to Peggy Sue Got Married is what captivated me the most about the movie. Again, a woman has knowledge of a future she may or may not be able to change.

In one flashforward, Louise reveals that she and Ian have parted because he believes she “made the wrong choice” to have their daughter. But according the aliens, there is no choice, because the future she saw is predetermined. The only choice she has is how she faces the events of the future.

Peggy Sue also learns to embrace the sorrows that come with the joys of loving her children and is even amenable to forgiving Charlie and perhaps one day reconciling with him.

Both films acknowledge that regret is a common feature of life, but that goes hand-in-hand with the things that matter to us the most. (I can’t help but mention that this is also a common thread with It’s a Wonderful Life, where George Bailey sees a life where his children are never born.) Louise and Peggy Sue—and George—choose to take the bitter with the sweet.

10 thoughts on “Remembering the Future: Peggy Sue Got Married & Arrival”