This post is part of the Reel Infatuation Blogathon 2018, hosted by Font and Frock and Silver Screenings. Read the rest of the swoony posts HERE!

When it comes to romantic pairings on screen, I can be a bit of a contrarian.

Example: when the Pirates of the Caribbean ‘shippers were raging Jack Sparrow (Johnny Depp) vs. Will Turner (Orlando Bloom), I was like, “What about Norrington (Jack Davenport)?” He was the guy the heroine Elizabeth’s (Kiera Knightley) father wanted her to marry. I didn’t want her to be forced to marry him, but of the three, I thought he was the most interesting and attractive. (Bloom bores me, and you’ve got to be kidding about Depp’s Jack Sparrow.)

Another example of this contrarian streak is my reaction to David Lean’s 1970 film Ryan’s Daughter. I was never a huge Lean fan, but just before I took my first trip to Ireland I binged on films that had been filmed there.

The film is a riff on Flaubert’s Madame Bovary, in fact, Lean was asked by screenwriter Robert Bolt to do a straight-up adaptation of the book, which he rejected. The film takes place after the Easter Uprising. World War I is still raging, with British soldiers stationed throughout Ireland trying to quell further rebellion. In the small coastal village of Kirrary, Rosy Ryan (Sarah Miles) has been spoiled by her doting father, the local publican (Leo McKern). She falls in love with the widowed schoolteacher Charles Shaughnessy (Robert Mitchum), who, against his better judgement, marries the much younger and passionate Rosy.

The marriage, both in and out of bed, is a bust for Rosy from Day 1. She quickly becomes bored with her husband and her life as a schoolteacher’s wife. One of the soldiers, Major Randolph Doryan (Christopher Jones), has a PTSD flashback about being at the front while alone with Rosy in the pub. They kiss passionately. Soon they are meeting and conducting an illicit affair.

Things are further complicated by the arrival of some Irish rebels who want to salvage weapons from a sunken German boat. The villagers not surprisingly support the rebels over the British, and when the rebels are betrayed they turn on Rosy, assuming she is the informer because of her relationship with Doryan.

Like I said, I’m not a huge fan of Lean’s movies, and this one has long been thought to be his weakest effort, something that he bitterly complained about in interviews for years. The film has been reevaluated somewhat, but to my mind it could be subtitled “A Girl in Search of an Orgasm.”

The problem is that Mitchum’s Shaughnessy is way more interesting and attractive (to me, anyway) than Jones’ Doryan. This is partially Lean’s fault, for two reasons. Jones was cast because Lean couldn’t get his first choice, Marlon Brando. He thought Jones had a similar intensity. He was so disappointed in Jones’ performance that he had his voice dubbed. That, and the harsh critical reception of the film, spurred Jones to retire from acting.

Mitchum was also not first choice for his role. Paul Scofield was offered the role but had to decline because of a previous commitment. Mitchum liked the script but was at a major low point in his life. Lean persuaded him to accept the role. 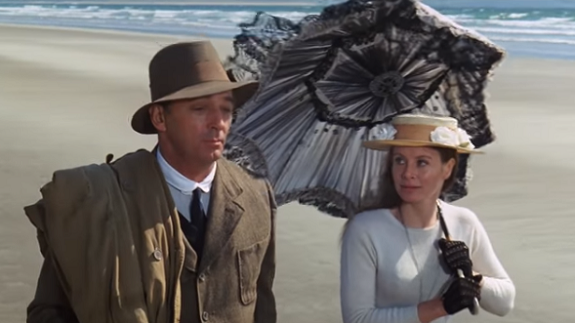 It’s not that I think Paul Scofield was unattractive, but I do believe I could have bought the story better if he had played Charles. Mitchum, even when he was in his 50s, had so much charisma and sexual presence on screen that it’s difficult to believe Rosy’s disenchantment with him.

The film tries, oh how it tries, to convince you that he’s a dud. It’s almost funny watching Mitchum trying to be boring. I recall once seeing an interview with Sarah Miles where she did a dead-on and hilarious impression of Lean directing Mitchum during the wedding night scene. Lean was embarrassed at describing exactly what he wanted Mitchum to do; Mitchum was matter-of-fact and explicit about what Lean wanted from him in the scene.

She seemed to recall Mitchum fondly, which could be another reason why the character’s ennui is unbelievable. Miles and Jones did not get along, which made shooting their love scenes even more difficult.

In spite of a hostile reception by critics, the film still won several awards, including a Best Supporting Actor Oscar for John Mills (as a mentally challenged villager) and for Freddy Young’s spectacular cinematography.

Mitchum ended up seeing the film as one of his better roles, and he was sorry that it was not appreciated in its time.

For me, the film’s major draws are the astonishing beauty of the Irish coast and Mitchum, who was still pretty easy on the eyes at this point in his life. 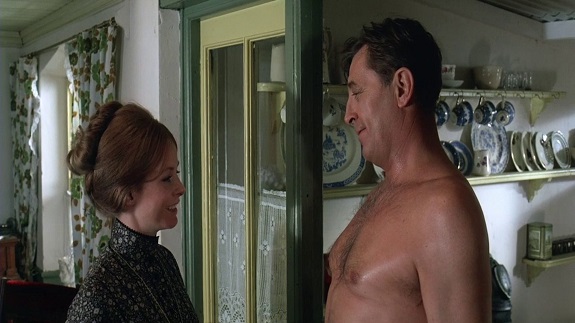