This post is part of the Shelley Winters Blogathon, hosted by Poppity Talks Classic Film and Realweegimidget Reviews. See a list of the rest of the participants in this event HERE!

We all grouse about remakes at one time or another, but there are some we like more, or at least as much, as the original.

Such is the case with the 1955 crime drama, I Died a Thousand Times. This is a remake of the classic Humphrey Bogart/Ida Lupino film High Sierra (and not even the first one; it was retooled as a Western in 1949).

I adore High Sierra. It’s definitely on my top five list for both Bogart and Lupino films. It was with trepidation that I approached the 1955 remake starring Jack Palance and Shelley Winters.

I surprised myself by liking it almost as much as the original.

The story is basically the same: career criminal Roy Earle (Palance) is released from jail and immediately tapped by a crime boss (Lon Chaney, Jr.) to plan and execute a big jewel heist at a fancy resort. His cohorts are Babe (Lee Marvin), Red (Earl Holliman), and an inside man named Mendoza (Perry Lopez). 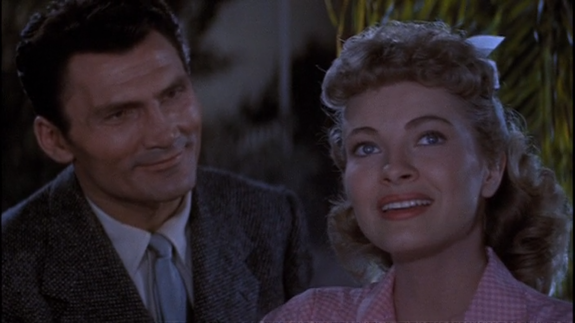 On the way from prison, Roy helps evade a car accident. Meeting up with the occupants of the other vehicle, the Goodhue family, he finds them friendly and grateful. He is immediately captivated by the couple’s granddaughter, Velma (Lori Nelson).

Settling in a mountain camp to plan and await the best time to commit the robbery, Roy is annoyed to find out that Red has brought a dance hall girl named Marie (Winters) with him.

While casing the hotel, Roy intervenes once again with the Goodhues when they accidentally run into a fancy car. For the first time, Roy notices Velma has a club foot. He arranges with a doctor to see if her disability can be corrected and is told it will be a relatively simple operation. 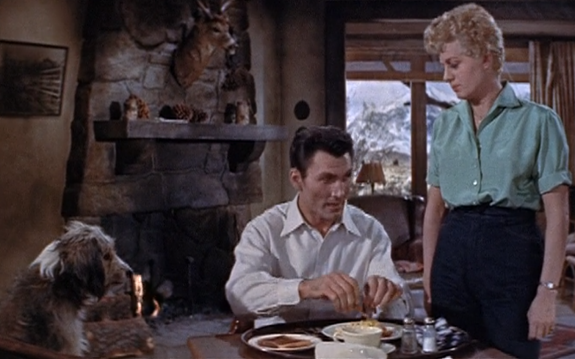 There’s trouble when Babe and Red fight over Marie and Roy finds Babe has been beating her. Reluctantly, he allows Marie to stay with him, but warns her that there can never be anything serious between them.

The heist does not go off as planned, with Babe and Red killed and Mendoza captured. Even though they risk capture, Roy visits Velma and is crushed to find she has another lover who want to marry her now that she is not disabled. Roy asks Marie to marry him, realizing she is the right woman for him.

Against Marie’s advice, Roy goes to get his cut from the heist, even though the crime boss has died in the interim. The police close in on him as he tries to escape over the mountains. Even though Marie could persuade him to surrender, she refuses, knowing prison would be worse than death to Roy. He is shot and killed.

Like many remakes filmed during the 1950s, this version is widescreen and in color, as opposed to the black and white original version. But overall, the story is nearly identical, right down to the stray dog named “Pard” who brings all his owners, including Roy, bad luck and eventually death. 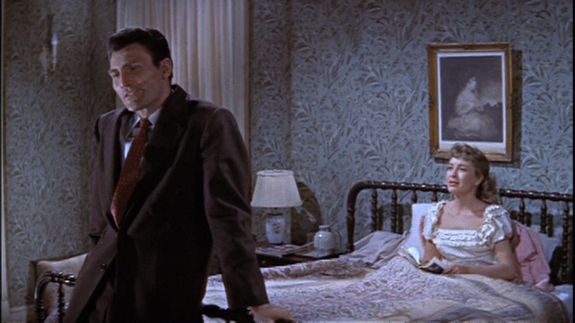 Roy Earle, as I mentioned in an earlier review of High Sierra, is an interesting twist on the standard noir protagonist. He is a deeply romantic man, who falls in love with the far too young (and less than innocent) Velma. He has a soft spot for the dog. He’s a criminal who might have had it in him to be a decent man if his life had gone in a different direction.

I truly enjoy Palance’s performance because so often he was typecast as bad guys of the sadistic sort in many of his other roles. It’s a nice change to see him in a more romantic and nuanced role. 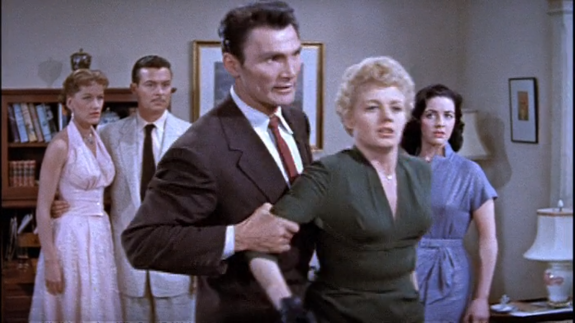 Winters is quite different from Lupino, not only in looks but also as an actress. She is more overtly sexual, but also more vulnerable. Marie is a woman who just wants some love and a feeling of security. To me, Lupino can do no wrong, but Winters does put across being lost and lonely with a great deal of poignancy.

I wouldn’t put I Died a Thousand Times in the same league as High Sierra, but it doesn’t have to be. I love the way Winters and Palance put their own spin on two of my favorite film characters.

7 thoughts on “The Shelley Winters Blogathon: I Died a Thousand Times (1955)”