This post is part of the Criterion Blogathon, hosted by Aaron at Criterion Blues, Kristina at Speakeasy, and Ruth at Silver Screenings. Click HERE for the full roster for this MASSIVE event!

People talk all the time about a particular movie that changes their lives. For me, it was a director who changed me and, most of all, how I look at film.

I was a student in college at the same time my mother worked for New Yorker Films, a company that distributed foreign and independent films. At the time, the New German Cinema was hitting its stride. The company distributed the movie The Marriage of Maria Braun, directed by Rainer Werner Fassbinder, which I chose to do for a final paper in one of my film classes.

The company had a private screening room, and because I was related to an employee, they allowed me to use it to watch the film several times to help me write my paper.

Even though I had seen the film already in a movie theater, it was an amazing experience to watch it three times in a row in a single day. I began to look at film in an entirely different light. It’s because of that experience that I decided to switch my major to film studies. Since the company distributed several of Fassbinder’s films, I found myself in that screening room watching as many as I could whenever I had the chance.

So, why did I not choose The Marriage of Maria Braun as the film to cover for this blogathon? Well, I wrote about it pretty extensively in school. (I still have that paper, too. I found it recently while packing for a move.) And as much as watching that film changed me, and as fantastic as it is, it’s not my favorite of Fassbinder’s oeuvre. 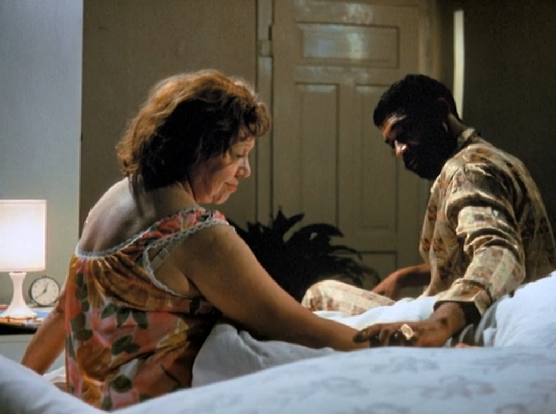 That distinction belongs to Ali: Fear Eats the Soul. Of all his films, this is the one I find hardest to shake after watching it. It just–stays with me, for days and days after I see it. I usually let a few years pass in between viewings because it haunts me so much–and this most recent viewing is no exception.

The story is of the unlikely romance between Emmi (Brigitte Mira), a middle-aged cleaning lady, and the much younger Ali (El Hedi Ben Salem), a Moroccan auto mechanic. Seeking refuge in a bar one rainy night, Emmi is asked to dance by Ali (which is not his real name, only what Germans routinely call male Arab workers). Ali accompanies Emmi home. Not wanting to send him back out in the rain, she invites him to stay in her spare room. During the night, they become lovers.

Emmi confesses to her daughter Krista (Irm Herrmann) and son-in-law Eugen (played by Fassbinder, who frequently acted in his own films) that she has fallen in love with a young Arab man. They laugh at her, thinking it is just a bit of fancy on her part. 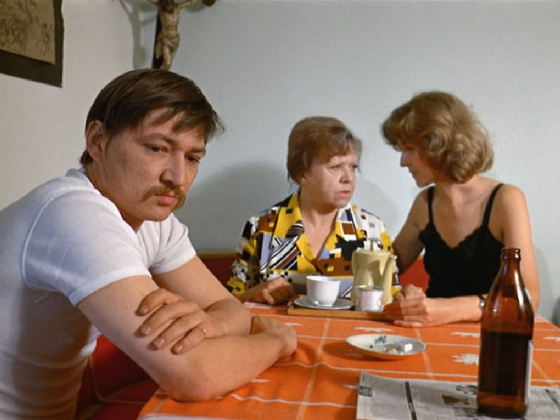 As her relationship with Ali becomes more serious and he stays at her house more often, her nosy and outraged neighbors complain to the landlord. The landlord’s son (Marquard Bohm) tells Emmi she is not allowed to have boarders in her apartment. She blurts out that they’re getting married. He says in that case it’s all right.

She apologizes to Ali for saying such a thing, but he says it’s a good idea that they get married. They go to a courthouse alone for the ceremony and then eat a fancy meal at a restaurant once frequented by Hitler. The waiter tries his best to humiliate them while they grope through the unfamiliar menu.

When Emmi announces to her sons and daughter she has married Ali, one of the sons kicks her TV set in. Hurling insults, the children walk out on her. Emmi finds herself increasingly isolated from friends, acquaintances, and co-workers. Ali also faces anger from his Arab friends over his marriage. 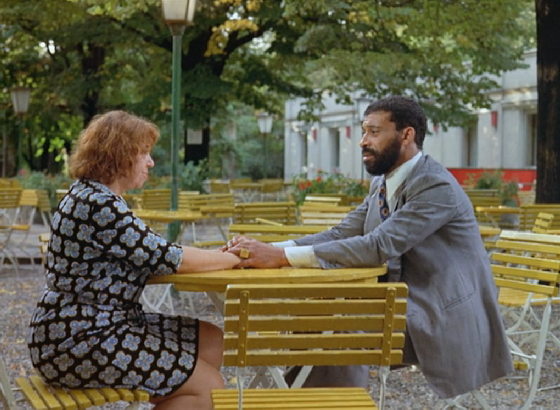 At a breaking point, Emmi insists to Ali that they go away for a while. When they come back, she is sure, things will change.

Strangely enough, they do change. Her children realize they need her for help with their children, so her son sends her a check to pay for the broken television. Her neighbors see an advantage to having a young, strong man to help out, so begin to be more civil and ask Emmi for favors. After humiliating Ali, the local grocer realizes he can’t afford to lose more customers to the increasingly popular supermarket, so he makes amends with Emmi, too.

Instead of bringing the couple together, this drives them apart, as Emmi allows her friends to marvel that Ali is clean and well-mannered. She even scolds Ali for not assimilating to German ways enough when he expresses homesickness. He starts staying away from home, sometimes with the bar owner (Barbara Valentin) who along with offering sexual comfort makes him couscous, which Emmi refuses to do. 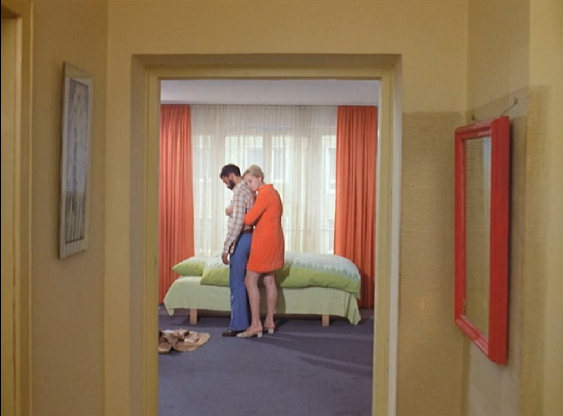 After Ali rejects her in front of his co-workers, Emmi returns to the bar where they first met and asks to hear the song they first danced to. As they dance again, Ali confesses his transgressions. Emmi forgives him and asks only that they be kind to each other when they are together. Ali suddenly collapses to the floor in agony.

In the hospital, the doctor tells Emmi he has a perforated ulcer–as do many other foreign workers. After an operation, he will be well again–but, the doctor warns, he will be back again in six months with the same complaint.
Emmi is certain she can keep him from becoming ill again. She sits by his hospital bed and looks out the window.

This is Fassbinder’s most accessible and popular film. Ironically, the prolific Fassbinder made the film just as an exercise to fill in time between two bigger projects, Martha and Effi Briest. It was shot in only two weeks.

The character of Ali (whose real name in the film is the same as his portrayer’s) is clearly based on Salem. At the time, he and Fassbinder were lovers. He suffered from a great deal of culture shock while living in what was then known as West Germany.

The story is also loosely inspired by Douglas Sirk’s film, All That Heaven Allows, which is about the romance of an older woman/younger man. Fassbinder was a great admirer of Sirk’s work, in fact, they met and became friends. There are two obvious references to the film: the scene where Emmi’s son kicks in the TV (in All That Heaven Allows, Cary, the heroine, is given a television by her children to entertain her once she becomes a widow) and the ending with Emmi staring out the window. At the end of All That Heaven Allows, Cary and her lover Ron reunite as he is recovering and plan to marry as they sit by a large picture window. 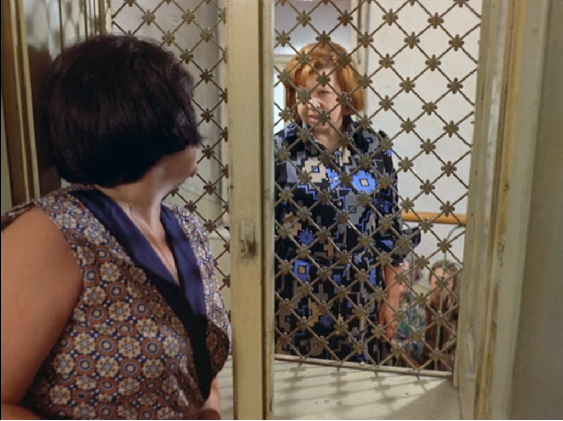 Sirk also had an influence on Fassbinder as far as style. Sirk was prone to framing shots with doorways and windows. Fassbinder’s movies are even more stylized, and he also uses the camera to distance characters, from both other characters and the audience. In many shots, he isolates Emmi and Ali, sometimes from others, sometimes from each other.

While Sirk was known for making movies that explored social issues such as racism, Fassbinder took his use of melodrama to explore political issues to the next level–or maybe he even jumped several levels. While Sirk’s version of Imitation of Life tiptoes around the most troubling aspects of racism in America, and All That Heaven Allows tacks on a rote happy ending, Ali: Fear Eats the Soul is an uncompromising portrait of the toxic personal consequences of racism in post-war Germany.

This most recent viewing, what made it even more poignant now than when I saw it for the first time in the early 1980s is its undeniable and disturbing relevancy. I literally caught my breath when Ali tells Emmi of how poorly Arabs are treated by Germans, especially “after Munich”–an obvious reference to the terrorist attack on the Olympic Games in 1972. Attitudes he describes are still so prevalent today it’s shattering to listen to them. 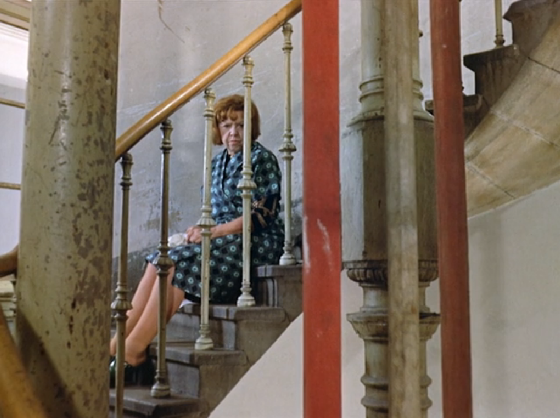 If you go into the movie expecting the kind of “social issue” movie Hollywood punches out each year for Oscar consideration, you will have those expectations completely overturned. This is not a by-the-numbers, holier-than-thou indictment of something most people already agree is wrong. By keeping the story deeply personal while also refusing to idealize its main characters, it never becomes didactic.

Emmi is no white savior, nor is Ali a knight in shining armor rescuing Emmi. She is a good, kind soul, yet is not immune to exhibiting prejudice. When a new worker in hired at her job, she joins the others in shunning her because she is Yugoslavian–another foreigner. Fassbinder does not play the respectability card with Ali’s character–he makes him a real person who is susceptible to self-destructive behavior. In many Fassbinder films, there’s a running theme of sexual exploitation. It’s entirely possible that Ali had ulterior motives for initially seducing Emmi. These are two flawed, desperate individuals who disappoint each other and themselves, but by the end of the story the love between them feels utterly real.

By many accounts–including his own–Fassbinder was not a nice person. Yet he made, almost as an afterthought, a truly humane movie. 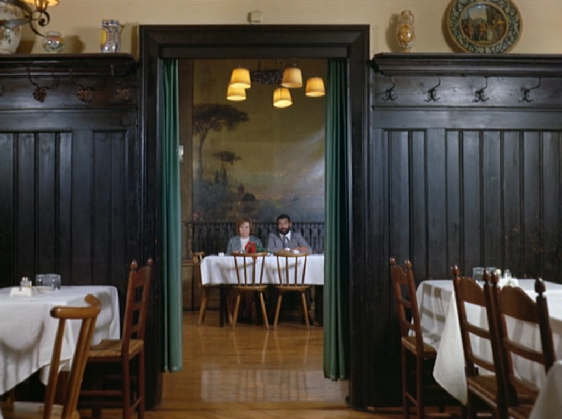