This post is part of the Film Noir Blogathon, hosted by Quiggy at The Midnight Drive-In. Read the rest of the posts in this event HERE!

When I heard about Quiggy’s film noir blogathon, I knew right away I wanted to cover both a classic and a neo noir. I picked High Sierra (1941) and After Dark, My Sweet (1990). Quiggy asked me if I would write separate posts or link them together in one post, the way he does on his site, as a double feature.

At first, I meant to write two posts, but then I realized I picked two films that share a common thread: protagonists with a somewhat more romantic outlook than the typical noir main character. In noir, the protagonist is usually in the throes of a sexual obsession that has little to do with genuine love. High Sierra and After Dark, My Sweet features main characters who genuinely fall in love—which is their undoing, not mere lust. 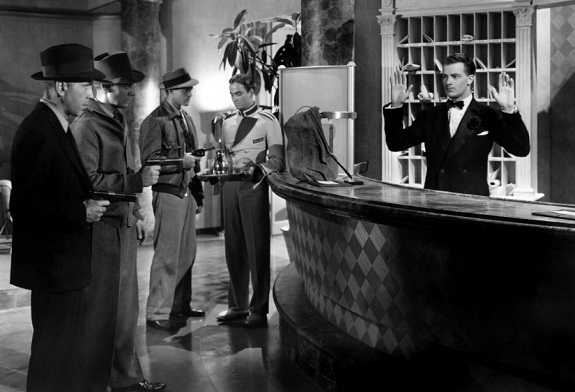 Directed by Raoul Walsh and written by W.R. Burnett and John Huston, High Sierra is the story of Roy Earle (Humphrey Bogart, in his first starring role), a recently released prison inmate. A mob head wants Roy to lead a heist at a fancy resort. The robbery would set the aging Roy up really well, so he agrees and puts together a gang comprising of Mendoza (Cornel Wilde), Red (Arthur Kennedy), and Babe (Alan Curtis). To Roy’s dismay, Babe brings along a dance hall girl named Marie (Ida Lupino). He insists Marie must leave, but she persuades him to let her stay. 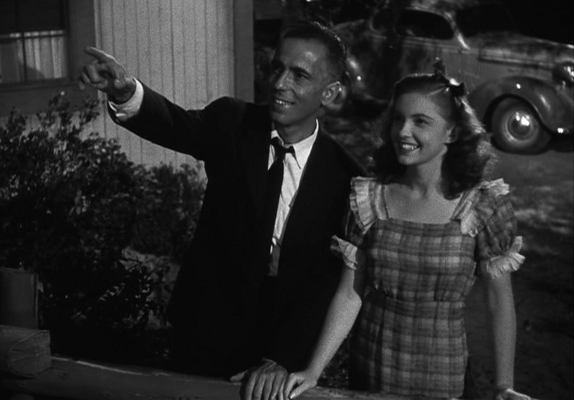 In the mountains where they are hiding out before the robbery, Roy meets a family that includes a young woman named Velma (Joan Leslie) who is disabled with a clubbed foot. He soon falls for Velma and offers to pay for the operation to cure her foot. Once she is able to walk normally, he believes she will agree to marry him. Instead, he is crushed by the return of her fiancée who is thrilled to find out Velma can now dance with him. Brutally rejected by Velma, Roy turns to Marie for comfort.

The heist is a disaster, with only Roy and Marie escaping. Only Mendoza survives the chase by the police and rats out Roy. The papers refer to him in sensationalized headlines as “Mad Dog Earle.” 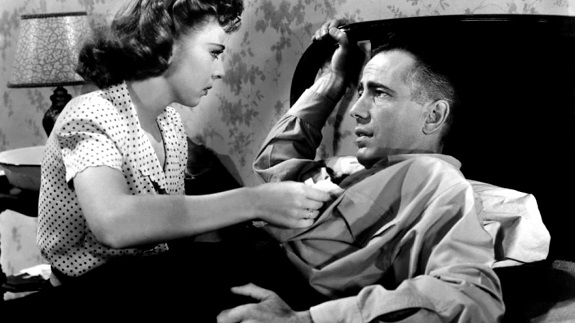 Roy realizes he genuinely cares for Marie, not Velma. They adopt a stray dog named Pard, even though Roy is warned he’s been bad luck for previous owners. When they can’t unload the jewels from the heist and feel the cops closing in on them, they split up.

The final scenes are in the Sierra Mountains referred to in the title. Cornered by the cops, Roy vows never to be taken by them alive. They find Marie and try to get her to persuade him to surrender. Wanting more than anything for Roy to live, Marie still refuses, knowing that’s not what Roy would want. But when Roy hears Pard barking, he knows she’s there and runs out calling her name. He is shot to death by a sharpshooter.

There’s some disagreement whether High Sierra even qualifies as a film noir. It’s possible to look at it as more of a gangster movie than a noir, or as a transitional film from one genre to the other. However, it has some elements that are definitely noirish. There is a fatalistic vibe to the story, and an interesting take on the “femme fatale.” Velma, the “good” girl, and Marie the “bad” girl, are actually the opposite of their initial impression. (I think their names, in a traditional noir, would have been flipped—all in all, a nice twist on our expectations of what makes a woman good or bad.)

The relationship between Roy and Marie is loving without any kind of sappiness. He says to her at one point: “I wouldn’t give you two cents for a dame without a temper” which is a very creative way of saying “I love you.”

Taking the part of Earle after it was rejected by George Raft and Paul Muni, Bogart was only billed second after Ida Lupino. After slogging through many forgettable supporting roles during the 1930s, the criminal with the romantic heart was Bogart’s breakthrough role. 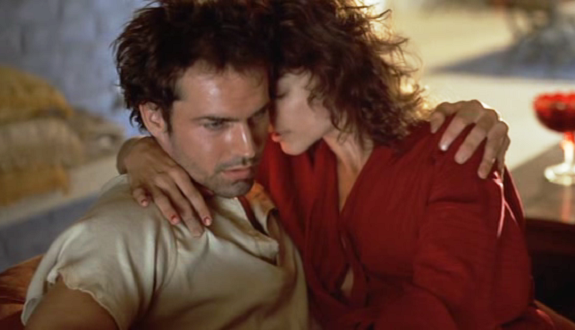 The 1990 film After Dark, My Sweet is based on the Jim Thompson novel of the same name. Directed by Jim Foley and written by Foley and Robert Redlin, it stars Jason Patric as ex-boxer Kevin Collins, who has escaped a mental institution. While in a bar trying to chat up a woman (Rachel Ward) he throws a powerful punch at the bartender. Running out of the bar, he is surprised when the woman, Fay Anderson, follows him and offers him a job as a handyman in her home.

A friend of Fay’s, who she calls “Uncle Bud” (Bruce Dern) shows up at the house. It turns out Fay and Uncle Bud want Kevin (referred to as “Collie” by Fay) to be the third man they need in a kidnapping scheme. An outcast from society since he killed a man in the boxing ring, Collie is desperate for human contact and powerfully attracted to Fay. Surprisingly, Fay convinces him to hit the road again, as their scheme is probably doomed from the start.

A doctor named Goldman (George Dickerson) offers Collie work in his home, promising to treat him without sending him back to the hospital. Collie is happy enough working for the doctor until he becomes aware that the doctor is attracted to him. He leaves in the middle of the night and heads back to Fay’s house. 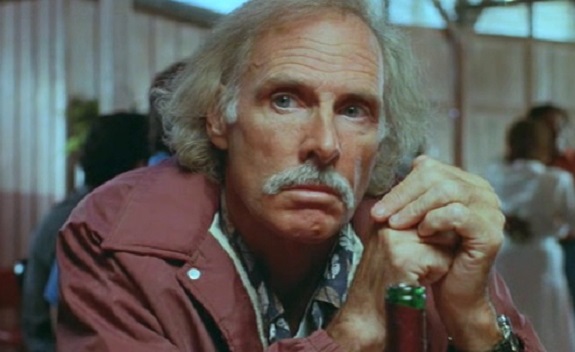 The doctor contacts Fay to “warn” her that Collie is dangerous. Uncle Bud convinces Fay to go through with the plan and not worry about Collie. In spite of their growing mistrust, they proceed with the kidnapping plan. It immediately goes wrong when it turns out the child is a diabetic. The suspicions between Collie and Fay become so bad that Collie believes Fay is planning to kill the boy. Now fond of the child, Collie vows to protect him.

Forced to kill the Doc when he puts two and two together about the kidnapping, Collie has a moment of clarity about Fay. He realizes she is not evil, only weak. He decides to contrive a situation that would make it look to police like she was his victim as much as the boy. He pretends he has to kill the boy to protect himself. Horrified, Fay shoots Collie to stop him. As Collie dies, he tells her she did the right thing. 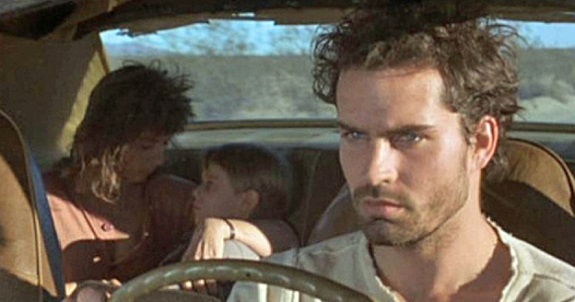 After Dark, My Sweet is hands down my favorite neo-noir. It was also a favorite of Siskel and Ebert, who praised it on their show more than once. The novels of Jim Thompson periodically come back into vogue, and during the early 1990s he was popular with filmmakers. (Along with After Dark, My Sweet, The Grifters and The Kill-Off were also filmed.) It does a superlative job of melding the classic elements of noir with a more modern sensibility. As in many neo-noirs, the sexual relationship is more explicitly portrayed than in classic noir, but it’s the love story that makes the film. It’s one clouded by mistrust, but the longing between these two wounded characters is palpable. They slide into crime not out of malice, but almost because they can’t think of anything else to do with themselves.

In High Sierra and After Dark, My Sweet, both protagonists die with the names of their women on their lips. But instead of saying their names like a curse because of a betrayal, they say their names out of love. In a way, love frees them, in one case from a literal prison, and the other from a mental prison.

6 thoughts on “The Romantic Noir Protagonist: High Sierra and After Dark, My Sweet”