My mom, who is disabled, watches a lot of TV now. I am always looking for new shows for her to watch. There are just so many times I can stand re-watching Gossip Girl, so I have resorted to searching for foreign TV shows. We’ve found quite a few good ones, so I thought I would start a series of reviews.

First up is the TV show Velvet from Spain. All four seasons of the show are currently available on Netflix streaming. 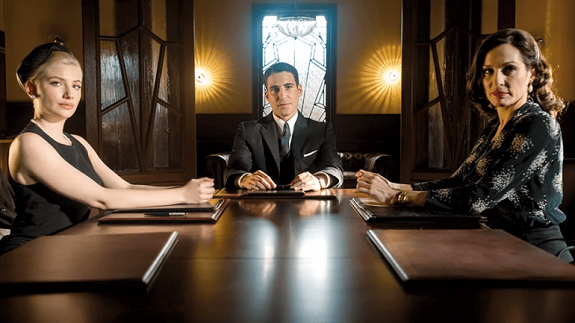 We gave this one a try for two reasons: first, we used to live in Spain, and secondly, the male lead is played by Miguel Angel Silvestre, who played Lito on (the now cancelled and lamented) Sense8.

According to a friend of my niece’s who comes from Spain, Velvet is the country’s most popular show. It’s kind of like their Downton Abbey, an impeccably produced period piece with a soapy vibe. Set during the late 1950s – early 1960s, it’s centered around a high fashion department store named Velvet. The son of the owner, Alberto (Silvestre) has been madly in love with Ana (Paula Echevarria) since they were children. Ana works at the store as a seamstress and is the niece of Emilio (Jose Sacristan) who heads the sales staff. Alberto and Ana’s love affair is of the star-crossed variety because Alberto is forced to marry another woman in order to save the store after his father’s death.

I’ll warn you at the outset: there are enough suds in this show to re-float the Titanic. But that’s part of its charm. There are several romantic relationships, some that cross from the downstairs employee living quarters to the top office. There are strong, intense friendships and, of course, plenty of enmities. All of this set against the glamorous fashion business with plenty of vintage fashion to drool over.

Echevarria and Silvestre make a stunningly handsome couple with onscreen chemistry to spare. Following soap opera tradition, Alberto is kind of a jerk who doesn’t really deserve his one true love. He even drops out of the story for part of one season (I assume because Silvestre was busy working on Sense8) leaving Ana to grow as a person, making Alberto even LESS worthy of her.

Whatever. They’re so pretty to look at I doubt most viewers care.

There is some lovely humor, especially involving the characters of Rita (Cecilia Freire) and Pedro (Adrian Lastra). There are lots of scenes of people sweeping stuff off the top of work desks for some passionate lovemaking (in rooms with GLASS doors, no less). But there are serious moments as well, as one character has to battle cancer, and another prejudice because he is gay.

The music is of note because it sounds like it’s from the 1950s-1960s (doo-wop and rock) but many of the songs are by contemporary musicians, not from the era. It gives a period vibe without using the same old songs we’re used to hearing all the time.

One strange thing about the show: with one exception, there is almost nothing that reminds us Spain was a fascist dictatorship at the time. No one mentions the Spanish Civil War, which is astounding to me, because I lived in the country right after this period and the after-effects of the war were still a fact of daily life for many people. I guess they didn’t want that to interfere with the mostly light tone of the show.

Other than that, this show is addictive and beautiful to look at. Unfortunately, there is not a dubbed version available, so you’ll have to put up with subtitles. Well worth it if you’re looking for a high-class soap opera to sink your teeth into.