This post is part of the “Some Kind of Man”: The Orson Welles Blogathon, hosted by Sean Munger. Read the rest of the posts in this event HERE!

“A policeman’s job is only easy in a police state.” – Miguel “Mike” Vargas, Touch of Evil.

There’s something odd about watching Orson Welles’ 1958 film noir masterpiece Touch of Evil at this particular moment in history. In one sense, it is regressive (i.e. white actors wearing brownface to play Mexican characters). In others, it seems remarkably timely (i.e. blatant portrayal of racism and police corruption on the border).

Duality is highly appropriate whenever watching a Welles film. There are rarely clear-cut heroes and villains. Welles as a filmmaker often sought to overturn the audience’s expectations, which was both part of his genius and part of what made him a pariah to the Hollywood establishment.

The movie is probably most famous for its opening tracking shot, which shows someone tossing a time bomb into the back of a fancy car and follows its passengers crossing the border from Mexico to the United States, where the car blows up. On the way we see Mexican policeman Miguel “Mike” Vargas (Charlton Heston) and his new American wife Susie (Janet Leigh) crossing the border on foot. As they kiss, the car disappears in a fireball.

Vargas has been fighting drug dealers on his side of the border, running afoul of the Grandi crime family. On the American side of the border, he irritates the American cops, including police captain Hank Quinlan (Welles) by becoming involved in the car bombing case. Sending his wife back to their hotel on the Mexican side, she is soon harassed by Grandi henchmen.

Vargas is appalled to find that Quinlan trying to frame the Mexican boyfriend (Victor Millan) of the wealthy victim’s daughter for the bombing. Quinlan resents Vargas’ interference and accusation that he has routine planted evidence to get convictions. He conspires with Joe Grandi (Akim Tamiroff) to get revenge on Vargas. Grandi sends his gang to the motel where Susie is staying where they torment her, finally breaking into her room, drugging, and (it’s implied) gang raping her. Quinlan murders Grandi and leaves the body in the room with Susie, to frame her for the murder. Vargas and Quinlan’s partner Menzies record him confessing to his crimes. Quinlan, catching on to what they’re doing, shoots Menzies and tries to kill Vargas. The dying Menzies shoots Quinlan before he gets the chance. 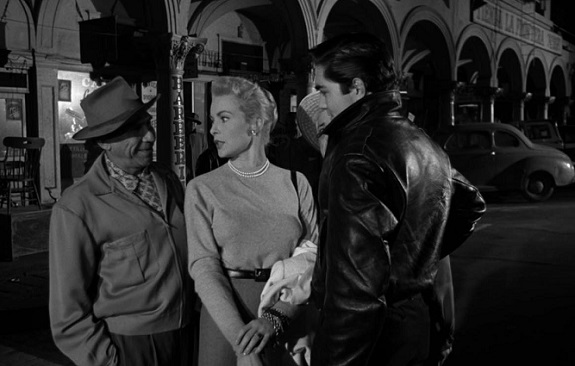 In the book the movie is loosely based on, Badge of Evil by Whit Masterson, the Heston role is an American and his new wife is Mexican. It was Welles’ decision to flip the nationalities of the characters. This creates an interesting dynamic. Heston doesn’t even attempt to do a Mexican accent (probably a good choice in the end) but “Mike” is the antithesis of the usual South of the border lawman stereotype. He is highly idealistic, in conflict with both American and Mexican lawmen.

Susie, in spite of her marriage, is not immune to some flippant racism (she tells one of the gang members she called him “Pancho” for fun). There’s a border-line arrogance to Susie, which could be attributed to her being American. In a way, she has as much contempt for Mexicans as Quinlan, at least those other than her husband. It turns out that the people abusing her are doing so at the behest of Quinlan, who uses Grandi’s resentment of Vargas for his own ends. 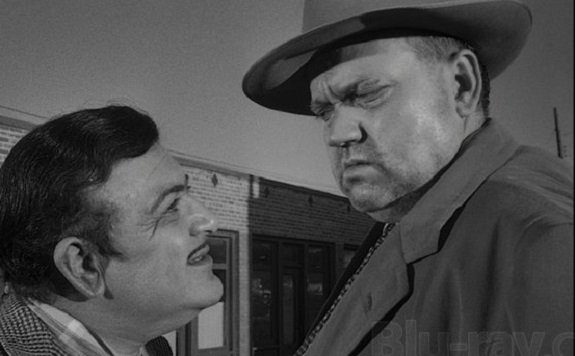 As corrupt as Quinlan is, the film shows him some sympathy in the end (he’s right about Sanchez’s guilt). He was once a good man who lost his way in a corrupt world. Vargas is a good man who virtually abandons his new wife with little thought for her safety so he can prove his righteousness.

As with most of Welles’ films, Touch of Evil is a treasure trove of remarkable supporting and cameo roles, including Dennis Weaver as a sexually repressed motel manager (whose character and performance are believed to have been inspiration for Norman Bates in Alfred Hitchcock’s Psycho), Zsa Zsa Gabor as a strip club owner, Mercedes McCambridge as a gang member (who wants to watch the rest of the gang rape Susie Vargas), and Marlene Dietrich as a brothel madam.

Legend has it that Heston, who was being sought for the project and was told Welles was being considered to play the villain, suggested Welles as director. Welles agreed to direct but only take a fee for acting as Quinlan. This would end up being Welles’ final Hollywood film as a director.

It has long been speculated that Welles rewrote the Quinlan role as a semi-autobiographical commentary on the unfair way Hollywood treated him. Whether that is true or not, Hollywood once again did its best to both botch his work and keep it from becoming a critical and/or popular hit. As with The Magnificent Ambersons, the film was changed with cuts and some scenes added by another director, Harry Keller.  The studio tried to prevent it from being submitted to prestigious films festivals and made it the “B” movie on theatrical programs. Nevertheless, it still won some prizes at film festivals. The film flopped in America but was well-received in Europe, becoming a favorite of French New Wave filmmaker Francois Traffaut. It was re-released in 1976 and attained its current status among cineastes.

There are several versions of the film, some that tried to recreate the finished film Welles intended. The print I saw for this review included the opening credits and Henry Mancini’s theme music playing during the tracking shot, which means it was likely the first reworked version of the film. A later one released in 1998 removed those distractions and is supposedly closer to Welles’ vision.

Whichever version you find, Touch of Evil is still an extraordinary melding of overwrought pulp fiction and cinematic virtuosity.