The post is part of the Animals in Film Blogathon, hosted by Crystal of In the Good Old Days of Classic Hollywood. Read the rest of the posts in the event HERE!

The 1933 film King Kong was a massive hit, not only in its original release, but in three subsequent re-releases. The same team—producer Merian C. Cooper, screenwriter Ruth Rose, director Ernest B. Schoedsack—that created King Kong also made Mighty Joe Young. It was a pretty blatant attempt to recapture the success of King Kong. (It even co-stars Robert Armstrong, who is in both movies.)

While Willis O’Brien, who did the animation for King Kong, was officially the supervisor of the special effects, his assistant Ray Harryhausen actually created most of them. Harryhausen went on, of course, to become one of the most influential special effects animators of all time. Mighty Joe Young is considered his first major film.

The story concerns Jill Young (Terry Moore) who is growing up on a farm in Africa. A lonely child, she barters with some natives for a baby gorilla. Although her father warns her she can’t make a pet of the gorilla she names Joe, he becomes her best friend.

Entertainment impresario Max O’Hara (Armstrong) travels to Africa with Gregg (Ben Johnson) so they can capture exotic animals for a nightclub concept he has created. They try (and fail) to capture Joe. They are stunned when a young woman arrives who seems able to make Joe obey her commands. 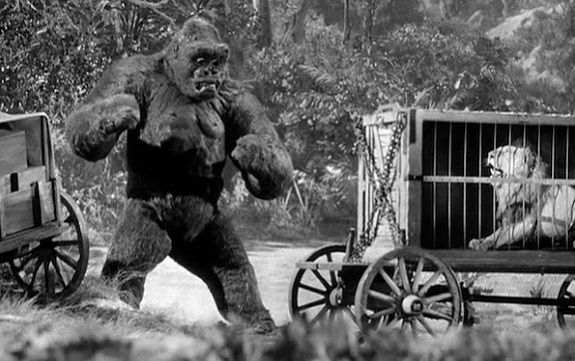 Now orphaned, Jill is persuaded by Max to travel to America with Joe so they can entertain in his nightclub. The act, which at first terrifies the audience, swiftly becomes a huge success. Jill and Gregg soon see that Joe is miserable. Max fast-talks Jill into staying longer. One night some drunks torment Joe and let him out of his cage. Because of the ensuing chaos and damage, a court order Joe shot. Jill, Gregg, and the now contrite Max plan a daring escape so Jill and Joe can return to Africa.

The story isn’t much to write home about, and of course it totally stretches credibility. Jill’s father is right, you can’t make a pet out of a ginormous gorilla. But it does have other elements to recommend it. There are some delightful moments of comedy, and the cast is very charming. (Armstrong especially is terrific as O’Hara.) Even though it’s kind of King Kong Lite, the film is more than worth watching just because the animation is so darn impressive, even to our modern eyes.

While there are times when the proportions and scale of the gorilla’s body are off, the expressiveness of Joe’s face is amazing. In close-up, his hair has individual strands that look astonishingly real. 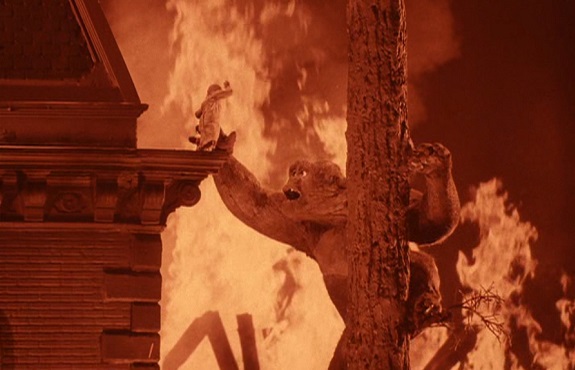 The most impressive sequence is during the chase scene. Trying to outrun a police car, Jill, Gregg and Joe come upon a children’s home that is on fire (yes, I know, I rolled my eyes, too). Jill and Gregg rush in to help save some children that are still inside. Joe climbs a tree to help them get out. All the while, the huge structure is collapsing at an alarming rate. They think all the children are out, until they see one more toddler on the roof.

Do I need to tell you what happens? Probably not, but the scenes are really incredibly suspenseful, both because of the use of animation and the tight direction. Another interesting aspect of the sequence is that it is tinted red, so it’s the only one in the film with any color at all.

Mighty Joe Young did not achieve the box-office success of King Kong. In fact, it was a box office flop that lost a lot of money. Yet it is considered an influential film when it comes to stop-motion animation. And besides that, it’s just plain fun.

9 thoughts on “The Animals in Film Blogathon: Mighty Joe Young (1949)”