This post is part of the Royalty on Film Blogathon, hosted by Emily at The Flapper Dame. Read the rest of the posts in this royal event HERE!

I could be wrong, but it seems to me the book Désirée, by Annemarie Selinko, was a rite of passage for many women of my generation, along with reading Jane Eyre and Gone with the Wind. Every time I bring it up in the company of two or more women in my age group, at least one is sure to say:

“That was my favorite book when I was a teen!”

Based on the true story of Désirée Clary, who was briefly engaged to Napoleon Bonaparte and later went on to marry a man who through odd circumstances became the King of Sweden, I have a theory as to why the story was so popular:

It’s a princess/queen story about a middle-class girl who stumbles into a crown without ever meaning to do so.

It’s about as serendipitous as a fairy tale gets.

The 1951 novel was adapted into a film in 1954, with Marlon Brando starring as Napoleon and Jean Simmons as Désirée. The movie opens as young Désirée announces to her family that she has invited two Corsican soldiers to their home: Joseph (Cameron Mitchell) and Napoleon Bonaparte. Napoleon quickly announces that he expects Joseph and Désirée’s sister Julie (Elizabeth Sellars) to marry, as she has an excellent dowry.

Désirée is nonplussed by Napoleon’s forthrightness but finds herself falling in love with him. He is arrested after the fall of Robespierre, but is soon released. Before he leaves for Paris, he proposes to Désirée. She happily accepts. However, he is a bit incensed at Désirée’s suggestion that he join her family’s textile business. He has much higher ambitions, he informs her. 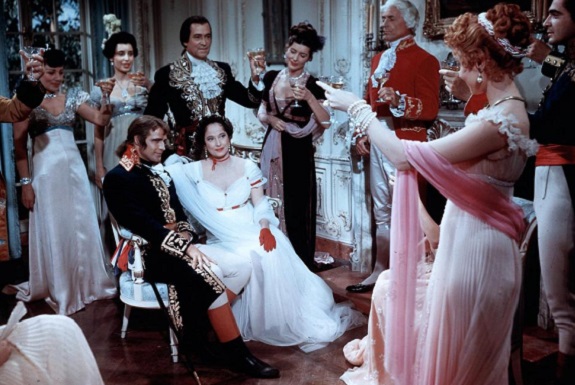 When she doesn’t hear from him for some time, she decides to look for him in Paris. Stopped at the door of the wedding of a well-bred woman, a soldier named Jean Bernadotte (Michael Rennie) agrees to escort her in. She is stunned to find out Napoleon is the groom. She throws champagne at the bride Josephine (Merle Oberon).

Bernadotte tries to comfort her. Désirée is inconsolable and brushes off his assertion that he is already in love with her. She accompanies her sister and brother-in-law to Rome, but is bored and unhappy living in a palace.

On her return to Paris, her path crosses again with Bernadotte’s—and Napoleon’s. Now rising in power in France, Napoleon hints that he wants her to become his mistress. Instead, Désirée agrees to marry Bernadotte.

They have a son and seem happy. Napoleon and Josephine are crowned Emperor and Empress, but Napoleon soon divorces the barren Josephine so he can marry Marie Louise of Austria.

As Napoleon becomes more power-mad, he is in conflict more and more with Bernadotte. Representatives for the King of Sweden offer Bernadotte the title of Crown Prince, which would make him heir to the throne of Sweden. He accepts, but angers Napoleon when he refuses to use his new position for Napoleon’s advantage.

Désirée is considered gauche by the Swedish aristocracy and finds it difficult to adjust to the cold climate. Miserable, she returns to France without her husband and child. Napoleon declares she is now a hostage in retaliation for Bernadotte’s alliance with Russia, which is now France’s enemy.

Defeat in Russia leads to Napoleon’s exile, but he soon returns to grab power again. Terrified that there will be a devastating conflict in France, Désirée visits him and persuades him to surrender. He comments that it is strange two of the most extraordinary men of their time fell in love with her.

YES, the last bit is TOTALLY preposterous. Of course, Désirée never persuaded Napoleon to surrender; it’s total Hollywood BS. Also, it appears she wasn’t as in love with Bernadotte as the story makes out—when she left him he acquired a mistress, and when she returned to Sweden permanently, they mostly lived apart.

One thing the movie does get right is how Désirée never shook her bourgeois origins, which caused a great deal of conflict when she resided in Sweden. She was a regular girl who found herself in the midst of some of the most important people of her day. Yet she not only became a queen, she also co-founded a dynasty that sits on the throne of Sweden to this day.

The sets and costumes are stunning, but the movie suffers from being one of the earliest shot in CinemaScope. Director Henry Koster was forced to shoot many scenes in long shot, which diminishes the intimacy of the story.

This is not considered one of Brando’s better performances (he only did it to fulfill a contractual obligation) but I’ve always loved the chemistry he had with Jean Simmons. His barely concealed resentment for having to play the part actually works for the character.

It’s also fun to watch the film skate around the steamy aspects of the novel while still staying within the Hays Code. At one point, Josephine confides to Désirée that Napoleon always knew she couldn’t have more children and even knew the reason why. Since she could only have been talking about either an abortion or an STD, you gotta wonder how sheltered those censors were back then.

In spite of its slightly clunky feeling and unwilling co-star, Désirée has many enjoyable moments. Every ordinary girl can watch it and remind herself someone like her once really became royalty. 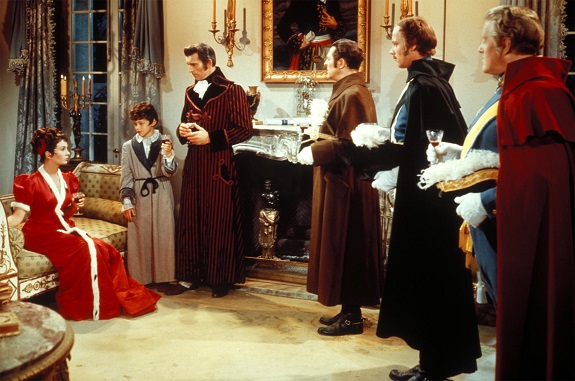